Although World War II had ended some fifteen years prior...

Essentially, the USS Tracer was part of the WWII Navy;  Ships LOOKED the same. Traditions WERE the same.  And young sailors were recruited from among the same WORKING CLASS.

Just click on the live link embedded within the cover illustration and go to the Amazon site where the novel can be purchased for a minimum am mount. 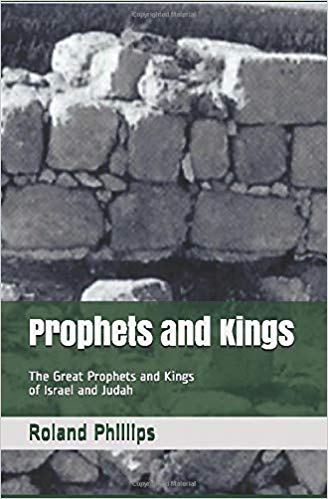 Another historical novel by Roland Phillip covering the era of the great prophets of the bible… Elijah, the Tishbite, and Elisha, son of Shabat.  Roland’s work begins at the end of the life of Israel’s great king, Solomon and follows the breakup of Israel into northern and southern kingdoms.  Meet the kings of Judah and of Israel, both good and bad. This manuscript follows scripture as handed down through the King James Version (KJV) of the Holy Bible. However, the author attempts to translate the Early Modern English of the Elizabethan period into a form more easily understandable to the reader, filling in blank spots in the narrative by offering the reader plausible explanations regarding; the great persecution of Ahab and Jezebel against the people of GOD; and the life of Elijah, Israel’s greatest prophet.


Mister Roberts was a Broadway Play before becoming a movie and some of the dialogue is classic.  Such as: Mister Robert’s letter to Doc, speaking about the crew of the USS Reluctant.  I’m thinking about…. “All the guys everywhere who sail from Tedium to Apathy and back again, with an occasional side trip to Monotony. This is a tough crew on here, and they have a wonderful battle record. But I've discovered, Doc, that the unseen enemy of this war is the boredom that eventually becomes a faith and, therefore, a terrible sort of suicide.  I know now that the ones who refuse to surrender to it are the strongest of all. Right now I'm looking at something that's hanging over my desk. A preposterous hunk of brass attached to the most bilious piece of ribbon I've ever seen. I'd rather have it than the Congressional Medal of Honor.”

In 1965 the popular Mister Roberts became a television show.  The show starred a young actor named Roger Smith most famous for being the husband of movie bombshell Ann Margret.
More Related Information

The P2V Neptune was the type aircraft the USS Tracer saw most often.  Sometimes the P2V’s would drop us a couple of bags of mail.

The two photos below are of members of the crew of the USS Tracer during the period 1963 and 1964.

On the left is a photo of three sailors from the Deck Division standing back against the bulkhead behind Gun Mount 32 on the fantail of the ship. The sailors are---from left to right---Ray Chapman, Seaman, Al Gracinette, Seaman and Roland Phillips, who was a Seaman at the time. The photo was taken early in 1963. Gracinette went on to become a Radarman striker(RD) and worked in CIC (Command Information Center) while Chapman stayed in the Deck Division and Phillips went on to be promoted to Gunners mate third-class.

The second photo is of Ray Chapman on the flying bridge (the following year) this was obviously taken on a southerly station because the weather is so good and the sea is clam. On some days the sea could be as still as glass

The photo below (on the left) is of a sailor named Lloyd Rutledge (nicknamed, Possum).  Rutledge is standing beneath the gun mount on the fantail.  Rutledge was a Deck sailor at the time, later however, he became a Signalman striker working under Eddie Bailey whose photo appears on another page standing in front of the armory door with three other sailors.  After his time on the USS Tracer was over Rutledge went on to reenlist and was transferred to a Minesweeper out of Long Beach, California.  He finished his second enlistment, attaining the rating of Signalman third-class; left the Navy and went home to Odessa Texas.  The other photo (on the right) shows the 3 inch 50 caliber gun-mount on the fantail of the Tracer.  The gun-mount is covered by canvas as it often was.  The 3-inch gun had a crew of at least four men; a pointer (the person who actually fired the gun); a trainer (the person who trained the gun from left to right) and loaders who loaded the breach with the 3-inch projectiles.

The two photos below are of the USS Tracer underway.  On the left you can clearly see the radar arrays and the starboard-side whaleboat hanging in its divots.  You can see a portion of the flying bridge with a signal lamp clearly visible.  The square area in the background, above the fantail, is an area called Secondary Steering.  In other words there was a helm there and an engine-order-telegraph all for the purpose of steering the ship if the bridge were taken out of commission.  The watch could be ordered to Secondary Steering and the ship maneuvered from there if necessary.  As a matter of fact the helm rudder-mechanism was located two levels beneath Secondary Steering and the ship could be steered manually below decks by manipulating the rudder-mechanism if absolutely necessary.  The first photo shows the starboard side of the ship.  The other photo is of the port-side of the ship.  Again you can see the radar arrays that gave the Tracer her purpose in life.  Also, you can see the flying bridge area and two portholes that were windows for officer’s staterooms.  Also you can see the whaleboat on the port-side.  The canvas-covered items just forward of the whaleboat are life rafts

The two photos below show (on the left) the Tracer returning to San Francisco and (on the right) a sailor actually steering the ship from the Flying Bridge.  The photo of the USS Tracer returning to port was taken in early 1964; the Golden Gate Bridge is visible in the foreground.  The Tracer went under the Golden Gate many times in her saltwater career and those of us who served aboard the Tracer looked up at the bottom of the Golden Gate Bridge many times.  Above the sailor’s head (the sailor in the photo) is the fishing net that was used to grab Japanese fishing balls drifting on the sea while the Tracer was on Northern stations.  The sailor with the earphones on is at his post when the Tracer is coming into port.  He is standing just outside the ship-fitters shop and above him is the Secondary Steering platform.  The photo on the right is of a sailor at the helm; actually at the helm while the ship is on station somewhere in the Pacific.  The weather was beautiful that day and the Captain had transferred the watch from the Pilothouse up to the Flying Bridge.  The sailor is manipulating the helm while looking at a compass and maintaining a course that has been ordered by the Officer of the Deck.  Nearby is an engine-order-telegraph, which the helmsman could use to order the engine room to slow down or speed up when he himself is ordered to do so by the OD. 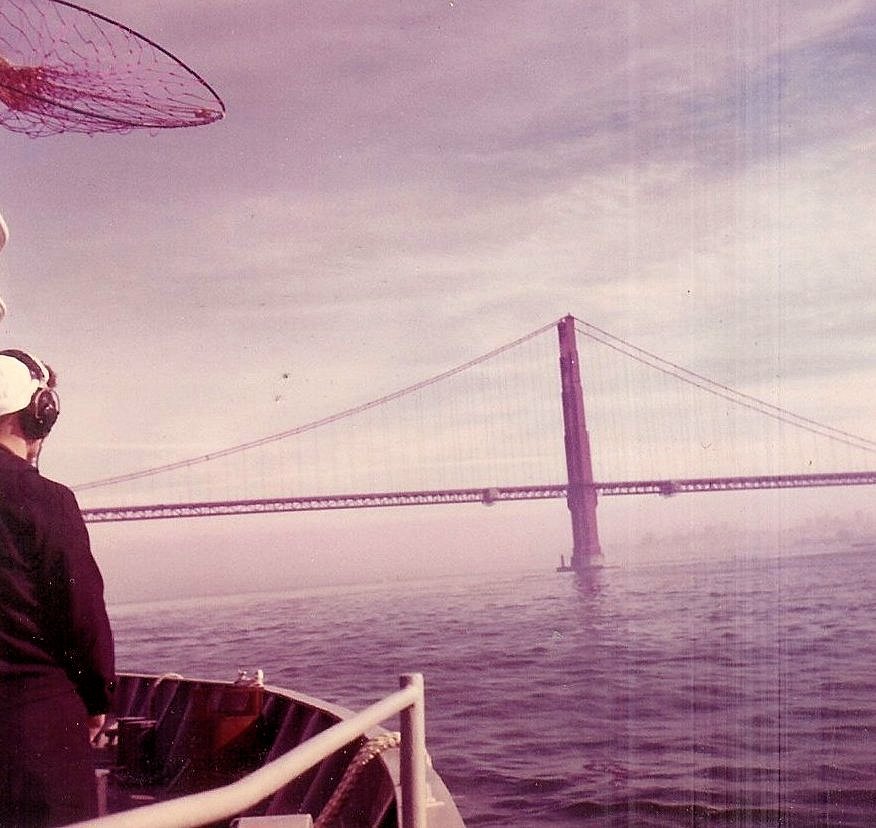 Your comments on this website would be appreciated. Do you have something to contribute?  If so, contact the Website Historian at the email address: fno2011@aol.com  The sole purpose for this website is to provide prospective on a bygone era, history from a different angle. The website is for general information only, no one is making money.